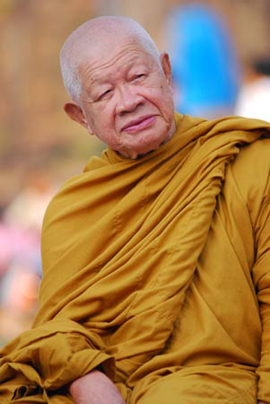 Patriarch of the Dhammayutttika Order in Canada

As a young boy, Luangphor Viriyang Sirintharo was stricken with a serious illness, which threatened his life; thankfully, a kindly ascetic healer, referred to simply as “White Robe,” intervened on his behalf in a manner that helped him heal physically and heightened his dedication to follow the Buddha’s path for the betterment of humankind. From this miraculous event, Luangphor Viriyang Sirintharo found refuge in Buddhism, and he became a scholar of the Buddha’s teachings, including the ancient Pali and classical Sanskrit texts. At the age of 16, Luangphor Viriyang became an ordained novice and he followed his mentor, Phra Ajarn Gong Ma, on a journey across Thailand’s rainforests and jungles, observing stringent Dhutanga austerities—ascetic practices of the Thai Forest Tradition of Theravada Buddhism—for the next 8 years. At the age of 20, he was ordained as a Buddhist monk in Chantaburi. Following the 8 years of his Dhutanga austerities, Luangphor Viriyang was introduced to, Phra Ajarn Gong Ma’s mentor, the esteemed Luangpu Mun (the Venerable Acariya Mun Bhuridatta Thera) in Sakon Nakorn. Luangphor Viriyang would spend the next 4 years studying advanced meditation practices; and with his esteemed teacher’s permission, he would later publish a scholarly collection of Luangpu Mun’s teachings called “Mutthothai.”

In the early 1960s, Luangphor Viriyang Sirintharo took up residence on a swampy piece of ground on the outskirts of Bangkok, where he eventually founded the Theravada Buddhist temple, Wat Dhammamongkol, which was completed by his many supporters in 1985. Since then, this temple project, which includes the tallest stupa in Thailand, has expanded to more than 25 acres of beautiful gardens, classrooms, dormitories, and meditation facilities. The Wat Dhammamongkol temple is currently home to approximately 500 monks whom Luangphor Viriyang oversees as the Lord Abbot.

Luangphor Viriyang’s close affiliation with Canada began in 1991 when he had a vision that a huge jade boulder would be found submerged in the water; he envisioned that such an enormous gemstone could indeed be found and carved into a statue of the Meditating Buddha. Following the discovery of a 32-ton block of jade in a riverbed in British Columbia, Canada, Luangphor Viriyang raised the funds needed to purchase this amazing gemstone and had it carved into the largest jade Buddha statue on earth, as well as sculpting a somewhat smaller jade statue of the bodhisattva Guanyin, known as the “Goddess of Mercy” in English. Both grand statues are currently located in Wat Dhammamongkol temple in Bangkok; and as Luangphor Viriyang Sirintharo says: “The true value of the Buddha image is to remind us of the Buddha’s teachings” (aka Dharma).

This auspicious connection with Canada was further enhanced by Luangphor Viriyang as he expanded development of Meditation Centers across the country. The first Thai Theravada Buddhist temple, Yannaviriya 1, was founded in Vancouver in 1992; the second temple, Yannaviriya 2, was introduced in Toronto in 1993; the third, the Dhammaviriya 1, was established in Ottawa in 1995. There are currently six Theravada Buddhist temples where meditation courses are available in Edmonton, Vancouver, Calgary, Niagara Falls, Richmond Hill – Toronto and Ottawa.

Theravada: literally means, “the doctrine of the elders,” or simply “the Teaching of the Senior Monks,” is the oldest branch of Buddhism. The Theravada is relatively conservative and largely adherent to the original teachings and rules of monastic discipline laid down by the Buddha. More recently, Luangphor Viriyang established the Willpower Institute Meditation Centers, which are located in each of Luangphor Viriyang’s affiliated temples in Canada, as well as Los Angeles in the U.S.A. By extending these revered Buddhist traditions from Thailand to North America, Luangphor Viriyang has advanced the enlightened philosophy of Buddhism, the training of meditation instructors, and the beneficial of practice of meditation to people of all faiths.